Cancer warning - do your fingernails look like this? Signs to never ignore revealed

CANCER symptoms usually include a change to the body’s normal processes or appearance. You could be at risk of lung tumours if your fingernails look like this.

Cancer is a serious disease where cells in the body grow and reproduce uncontrollably.

The new, cancerous cells can destroy surrounding tissue, and can spread to attack health organs.

Cancer symptoms usually include any unexplained changes to the body. That may involve finding blood in your urine or stools, or the sudden appearance of a lump.

But, you could also be at risk of cancer if you find your fingernails have become elongated.

‘Finger clubbing’ means specific changes in the shape of your fingers and fingernails, according to Cancer Research UK.

“The nails then curve more than normal when looked at from the side,” said the charity.

“The ends of the fingers may then get larger - when they are called drumstick fingers.”

Finger clubbing may be a warning sign of lung cancer.

It’s caused by a build-up of fluid in soft tissues at the end of the fingernails, added Cancer Research UK.

The NHS said: “Clubbing of the fingertips can run in families and be entirely harmless.

“However, if it suddenly develops, it may be a sign of one of many underlying medical conditions, including long-term lung disease or heart disease, inflammatory bowel disease, and cirrhosis of the liver.”

Other lung cancer symptoms include a cough that doesn’t go away, persistent chest infections, or coughing up blood.

Signs of the condition tend to get worse over time, and the symptoms are usually difficult to spot during its early phases. 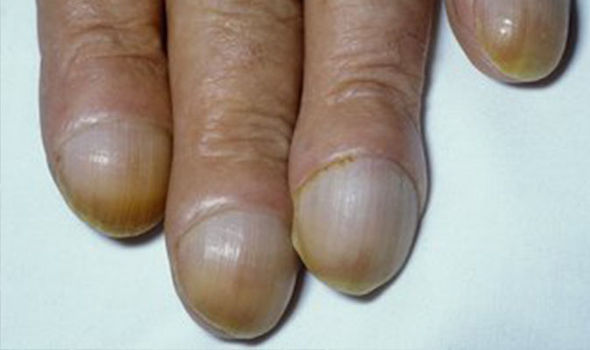 Lung cancer is one of the most common types of cancer to be diagnosed in the UK.

More than 80 per cent of all cases are caused by non-small cell lung cancer.

The cancer is rare in anyone under 40 years old, and is most commonly diagnosed in people between the ages of 70 and 74.

Eating a low-fat, high-fibre diet could lower your chances of developing lung cancer.

You could also help to prevent the disease by avoiding smoking, and doing regular exercise.