Researchers found DDT exposure before puberty may have increased the breast cancer risk for women in their 50s. Study is the latest to suggest early-life exposures, even prior to birth, may hold the key to understanding who gets diseases.

Melinda Lewis remembers splashing in the irrigation canals that outlined her grandpa's walnut and almond groves in the late 1960s.

Two decades earlier, her mother had played in those same Escalon, California, farm fields as crop dusters flew overhead, releasing a new "miracle" chemical—a war-time innovation—the insecticide known as DDT. Since a bout with atypical hyperplasia, a pre-cancerous breast condition, in 1997 at age 36, Lewis often has wondered whether exposures to farm chemicals in childhood—her own and her mother's—may have heightened her health risks.

In recent decades, it's become increasingly clear that certain adult diseases may have their origins in childhood—or before. Early-life exposures—including those that take place in the womb—may hold the key to understanding who gets diseases such as breast cancer or heart disease, say environmental researchers.

Some of the most reliable evidence for this link comes from exposures that took place during World War II. Years after the Dutch "Hunger Winter" of 1944-1945, babies conceived during the famine were more likely to suffer from obesity, diabetes, and heart disease in adulthood than their peers born shortly afterwards.

Teenage girls in Hiroshima and Nagasaki were far more likely to develop breast cancer years after the atomic bombings than women who had been 35 years or older when the radiation exposures occurred. 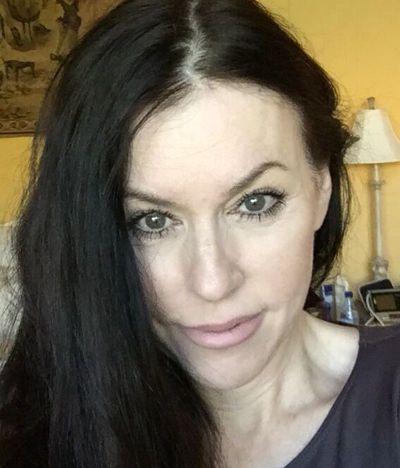 Yet such ailments often take decades to develop, making the link between environment and disease difficult to study—and prove.

Lewis, and her mother, who passed away in 2013 after suffering from a rare blood disorder, are part of a 60-year-long study of Northern California women, their children and grandchildren, that's now yielding clues on some of science's most vexing questions about environmental influences on health—including the long-debated role of DDT in breast cancer.

"What we've learned over the years is that environmental exposures that occur during important periods of breast development can play a role in later-life breast cancer risk," Barbara Cohn, director of the Berkeley-based Child Health and Development Studies, told EHN. 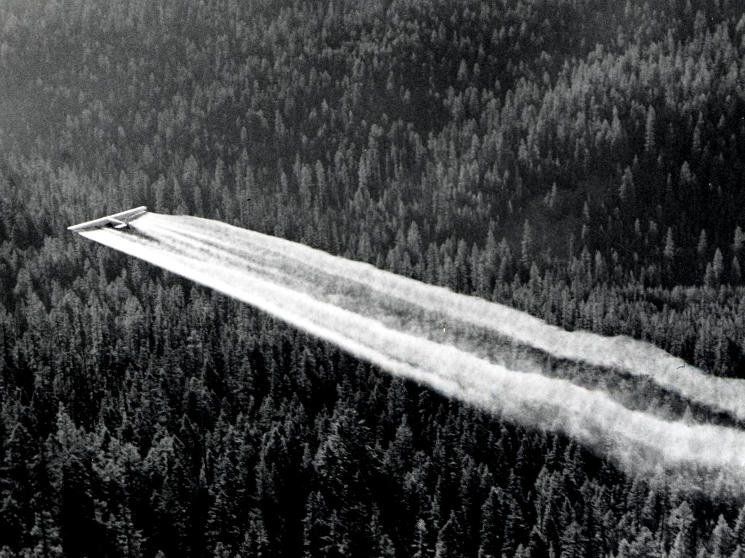 An airplane spraying DDT over Baker County, Oregon, in 1955.

Cohn and colleagues showed recently that pre-puberty exposures to DDT may have increased the breast cancer risk for women through their early postmenopausal years.

DDT was used heavily on farms in the U.S. and around the world from the 1940s through 1960s, but banned in 1972 after it was found to accumulate in wildlife. The chemical, along with the other chemicals it breaks into as the body metabolizes it, also appeared to mimic the hormone estrogen. After discovery in the 1970s that another synthetic estrogen, diethylstilbestrol (DES), increased the risk of breast cancer in women who took the drug during pregnancy, scientists questioned whether DDT exposure might have a similar effect.

Yet by the early 2000s, numerous studies, including a major research effort to determine whether certain environmental contaminants increased the risk of breast cancer among Long Island, New York, women, failed to find a link between DDT and breast cancer.

But there was a problem with the Long Island study. Science was beginning to show that breast cancer may have its origins early in life—while the breast tissue is still developing—and that exposures to pollutants during critical windows of breast development may matter most.

Since the researchers couldn't go back in time to measure what chemicals the women might have been exposed to years ago, they did the next best thing. They measured DDT levels in the bodies of the Long Island women during the current period—when most were middle-age or later.

"We knew at the time that measuring certain environmental exposures late in life wasn't going to give us an absolute final answer on risk," Regina Santella, a biochemist at Columbia University in New York, who was involved in the Long Island Breast Cancer Study Project, told EHN.

The Child Health and Development Studies—with its 60-year-long dataset of 15,000 California families—offered a unique opportunity to fill in some of the blanks about early life exposures that the Long Island study couldn't answer. Researchers had blood samples from women who had been pregnant during the late 1950s and early 1960s, when DDT use was at its peak—and when the women were much closer in age to those key windows of breast development. Cohn notes that pregnancy, itself, may also be an important window of susceptibility.

In a series of studies, published since 2007, Cohn and other researchers who study the California cohort, have shown that women exposed to high levels of DDT both before and after puberty are at an increased risk of breast cancer through age 54 and that these risks are greatest for women exposed before puberty.

The latest study, published earlier this month in the Journal of the National Cancer Institute, found a 40-year lag between the timing of a woman's first DDT exposure and her breast cancer diagnosis. Women who would first have been exposed to DDT in infancy had the highest risks of developing breast cancer before age 50, while women whose first exposure would have been between ages 3 and 13 had a three-fold increased risk of developing breast cancer between ages 50 and 54.

The findings fit with what we know about breast development, Ana Soto, a developmental biologist from Tufts University who was not involved in the research, told EHN. The mammary gland develops throughout life. The main stages are: before birth, at puberty and in pregnancy. Hormones dictate when and how breast tissue remodels at these key junctures.

While we've stopped using DDT in most parts of the world, it's possible that other hormone-disrupting chemicals we're putting in the environment today could show a similar risk pattern, Cohn said.

For instance, laboratory studies of cells, and some on animals, have linked exposure to some widely used chemicals in plastics—BPA and certain phthalates, for instance—to breast cancer, though long-term studies in humans are lacking.

These early-life exposures may be affecting more than just cancer risk. Studies in animals suggest that prenatal exposures to BPA, phthalates and some other chemicals dubbed obesogens, may pre-program the way the body stores fat, increasing the risk of obesity and related diseases later on.

Breast cancer, like most other diseases, is caused by a mix of genetics, environment and behavior. Most medical studies are designed to look at immediate consequences or benefits—the effects of losing weight or changing one's diet, for instance—in a tighter time frame. These kinds of studies can help show people what they can do right now to reduce their risk of disease.

"Long-term cohort studies like this present a rare opportunity to study disease risk from a higher elevation where we can see the bigger picture," Dr. Kenneth Spaeth, an occupational and environmental health specialist at Northwell Health in New Hyde Park, NY, told EHN.

A whole lifetime of different behaviors and exposures contribute to disease risk in genetically susceptible people.

"We know now that there are benefits and harms to the things we do and the things we put in our bodies, and that those consequences start at a young age. We see that here in regard to DDT," Spaeth said.

And increasingly this seems true for many of today's endocrine disrupting chemicals as well—but proving definitive health links remains difficult, which gives manufacturers a pass to continue producing compounds that we know little about with little interference from regulators.

Melinda Lewis will never know whether exposure to DDT during those early days playing on her grandpa's farm­—or any other specific chemical or exposure she may have experienced before or since—was tied to her breast cancer, but that doesn't matter much to her anymore.

She's now a grandmother. Lewis looks at her toddler grandson crumbling cheese and crackers on the floor of her Benicia, California, home and asks, "am I now unwittingly exposing him to chemicals or products around my house that could impact his health?"